Memories of the Heart

Most of us know Gudrun Jones as the co-founder of the Lakeside Spay and Neuter Center, “The Ranch”.   Readers of the Lake Chapala Review and the Ojo del Lago will also remember her monthly columns, “Petcetera” and “Paw Prints on My Heart” respectively.

Gudrun has published two books. We will be celebrating both at the luncheon.  Her most recent publication; MEMORIES OF THE HEART is a treasure that you will want to keep close by.

Gudrun expresses her deepest thoughts and feelings about the universal issues we all can feel.  Thoughts about family, love, the seasons, first love, romantic love, children, parents, brothers and sisters, life and death, reach out to us, and we feel the resonance deep in our own hearts.

A favorite of mine is the walk Gudrun takes through all the months of the year.  The poem ends in December,

“As I look back on my walk through the year, I cannot choose a season, and could I change the world, I would not know how.  But then it is not the world which needs the changing…only you and I.”

Her first book, “THE DREAM IS OVER, THE NIGHTMARE BEGINS, was written in 1987.  It is a most unusual book because the author was searching for the truth of how her family survived the war in Nazi Germany.

Gudrun’s father was in the German Army and her mother was away many unexplained times from their village.

After her mother’s death Gudrun found journals her mother had written starting in 1940.  We read about the terrors and horrors that non-Jewish families suffered, their confusion and repulsion, as they began to learn about the realities of World War II and Hitler’s regime.

A conversation between a Jewish man and the mother of the house:

“Why didn’t you leave the country?”  “I don’t know.  I guess I wanted to help your father save other Jews and find out what happened to my parents.”

“Yes, relocated.” “But why should a Jew be relocated?  Is he less of a German than you are?”

“I know…you just never thought about it, just as thousands of other people never think about it.  To them, relocation is just a way for Jews to happily live together.”

You will delight in hearing Gudrun read the words she has written. 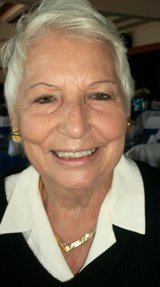